One of my holiday plans is to visit Salatiga, a small but comfy city where I spent more than four years in order to get my bachelor of education in English. And visiting coffee shops there is also included. A must-visit one is definitely my beloved and all-time favorite coffee shop, Frame Coffeehouse. Then my cousin took me for a super-late night trip to a new place called Kafeole, only to find out that they’re closing up, so we ended up in the middle of nowhere, drinking milk instead, since there were nothing left for us but milk.

But after a brief glance at the surroundings at Kafeole, I decided I ought to pay the place another visit.

So the next day, I contacted Ikka, one of my girl friends, and asked her to have lunch with me at Kafeole.

Ikka, just like me, is someone who loves to spend some quality time with good food, good coffee, and good mood, supported with nice view and surroundings.

Our first impression of Kafeole is that the place definitely got a nice view.

The place is apparently consisted of two, if not three, small houses, located next to each other, although not right next to one another. One is for the coffee shop, one for the kitchen and another one is for the indoor seats as well as the cashier. I don’t know whether you could just pay from the coffee shop or ask the bill to the waiter/waitress instead, but Ikka and I was paying directly to the cashier as we strolled down together, exploring the place and taking some pictures.

Other than those three small houses, the rest of the place are gardens–nah, actually they’re trees and plants arranged beautifully around the place, with cages and bells, lanterns without candles here and there. Really, it’s beautiful. 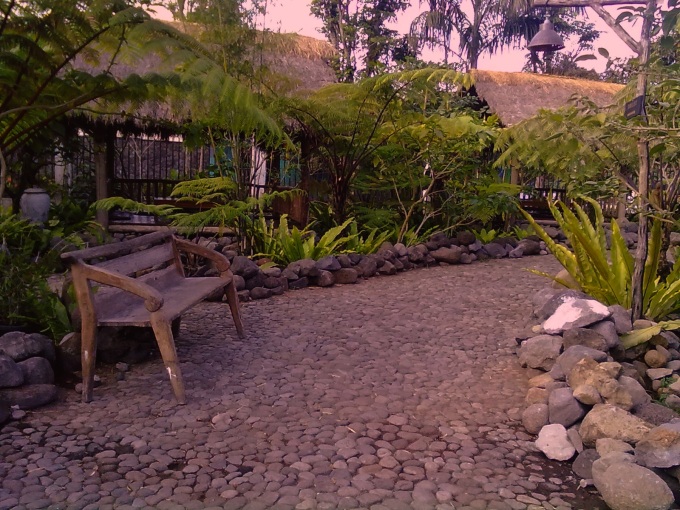 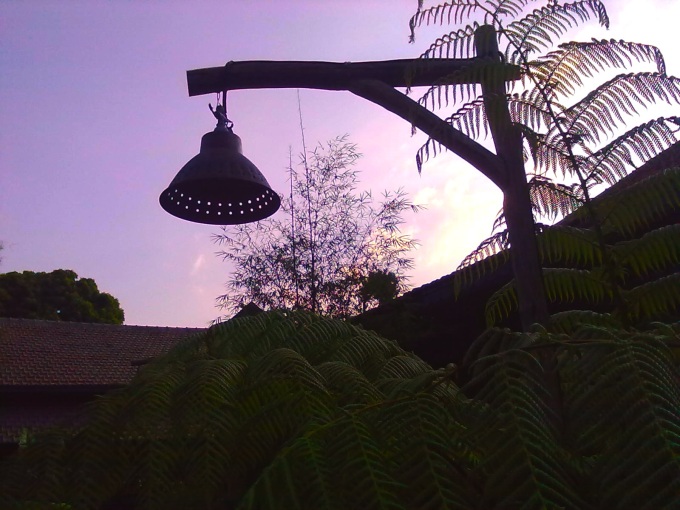 So we decided to enjoy the view by choosing outdoor seats which are arranged in small bungalows. One bungalow consists of a table with 4 chairs. Pretty. Unless rain poured down and ruined everything. I’m not really a fan of rain, really.

Then we ordered Rempelo Ati (chicken’s liver which is fried), Ca Kangkung Udang (I really don’t know how to explain this in English other than vegetable with shrimps. I suggest you google it), and for drinks, I ordered Hazelnut Coffee and Ikka ordered a Cappuccino.

Let’s assume that the highest score for everything is 10. We agreed that the place deserved at least a 9, if not a 10. We found out that we could actually booked the place for a meeting, or any kinds of events. Well, with such view, who wouldn’t want to book that place? Overall, it’s fancy.

Really, even the menu itself looks fancy.

Until we tasted the food.

Okay, before I got too negative, let me tell you this: the food is tasty. Really. It’s far from awful. We definitely enjoy our food.

And Ikka and I decided we would give them a… 7, average. That applies for the package of the food as well.

I told you, they’re not bad.

Now, I already told you that the food is delicious. It’s just that… for such a place so fancy, with fancy menu as well–sakes, their menu varies from Indonesian food, Chinese food, to Western food. I’m gonna keep it short for you: we had a high expectation on the taste just by looking at the place and the menu. We expected to be wow-ed.

But it was okay.

Were it a traditional simple restaurant, we’d probably give it a 7.

I know taste doesn’t have anything to do with the view, but I always thought that’s the art of owning and running a restaurant and a cafe. You are challenged and demanded to mix and match your taste and style of… everything.

Which creates the mood.

Then the food, which is actually the main essence of a restaurant/cafe.

Some people can still deal with it, really, though I doubt I can.

Can you expect people to simply come there and bring their own food just because they wanna be in the place and enjoy the view?

Well, let’s hope the owner doesn’t have a bodyguard who’s ready to throw you out.

But it was okay so far.

Then we drank our coffees.

At least we agreed that we cannot taste anything in our coffee but milk. And we thought we ordered coffee. But we barely taste the coffee.

Another thing is that we expected our coffee to be smooth. They weren’t. Our coffee tasted like the coffee weren’t blended successfully.

Point is, the coffee sucks.

“So, dya wanna go and check out the coffee shop?” I asked Ikka.

There was a brief silence before she finally answered, “I don’t think so. The coffee kinda ruined my mood already.”

So we tried to regain our mood by exploring the place instead and taking pictures.

Sorry Kafeole, but I think you have a great potential that you ought to dig deeper. Unless you noticed that, I don’t think I’ll return.