Found this reading survey here, and I thought this is not a bad idea to kill time and share some books that I’ve read.

Just a little intermezzo before I continued with another Bird by Bird Journal, this is a little confession that I’m about to reveal: I never actually read Paulo Coelho’s blog despite the fact that I put the link on my blogroll on my sidebar.

I kept telling myself that I would read it soon, only to open the blog and then glanced it quickly before finally closing the window.

But anyway, I just read it today, and I stumbled across this post, where it contains an excerpt from one of his novel By The River Piedra I Sat Down and Wept. The second line of the excerpt captured me right away:

“We will only understand the miracle of life fully when we allow the unexpected to happen.

So I continued reading, and as usual, I let myself to be amazed by each lines which were arranged beautifully, sentence by sentence.

Then I go to the link below the article, which lead to Amazon.com where I found out that I could just buy a used paperback version of this book for only less than US$ 1.00

One problem, though: I don’t own any credit card, and I have only one buck in my PayPal account, which I never use.

Sorry, credit card is not a very common thing in my country. As well as insurance.

Anyway, as I’d usually read everything that I see, I read the book description. The plot summary strikes me as the plot resembles Gaarder’s The Castle in the Pyrenees so much. Well, at least that’s the impression I get from reading the book description. Pyrenees. Two lovers. And there would definitely be a lot of ponderings, and thought about religion and belief.

No. Wait a minute. It’s not the complete title.

By the River Piedra I Sat Down and Wept: A Novel of Forgiveness

Well, of course, that’s a stupid hunch. And not that I hate forgiveness. Really. That’s not the problem. In fact, I believe that forgiveness is the most beautiful thing that could ever happened to anyone (other than love, if you believe in one). But ‘A Novel of Forgiveness’ could also mean a tearjerker.

Another thing is when I read the review, I found that it might not be that similar to Gaarder’s The Castle in The Pyrenees.

Just in case you haven’t read The Castle In The Pyrenees, let me tell you this: I LOVE that book.

It’s a philosophical novel (just like Gaarder’s other works) about two ex-lover who bumped into each other after 30 years. Each of them have married someone else and have a family of their own, but they decided the reunion to be a rare and valuable opportunity, so they agreed on exchanging emails.

Through these emails, Gaarder presented a massive debate about life, God, and beliefs.

The guy, Steinn, is an intellectual who at the same time is an atheist, while Solrun, is the opposite: superstitious and religious. Those two different characters alone already make the story interesting.

Another thing that makes me really in awe with Jostein Gaarder is how he started this debate: Was their reunion a coincidence, or a fate? Of course Solrun said that it’s a fate while Steinn told her otherwise.

It’s definitely a thought-provoking book for me, not to mention (and babble) why I love Gaarder’s works so bad, and it ended rather unexpectedly as well. As usual, Gaarder never really disappoint me.

But I don’t wanna get sidetracked here. I didn’t write this to talk about The Castle in The Pyrenees.

Of course there’s no two novels that are exactly the same, but still, from what I read in the book description, this book seems to ponder over the same theme. Similar, at least. And yes, I’m very interested to read it. Soon. Someday. Arrrgghh, I don’t know when, but I will save it in my list for later.

The thing is that, the last part of the title kinda makes me reluctant to actually read it. Other than the fact that it’s a tearjerker, it seems like it’s gonna be a very religious book.

What I really like about Gaarder is that he could be religious by putting some Christian values and beliefs here and there, but in the end, he never actually stated which one is right and which one is wrong. He didn’t strike me as an author who’d try to Christianize his readers.

Well, I believe Coelho’s not trying to Christianize anyone here, but still, a book of forgiveness… man, it’s seems so heavy to me.

Then I read a review which gives me a clearer description of the story, then I thought, “Man, this is gonna be way heavier than Gaarder’s The Castle In The Pyrenees.” How so? The review clearly put it as ‘poetic,’ ‘artistic and almost dreamlike.’ It’s definitely not something that you could read lightly while you’re idling at work. Not to mention the number of distraction that might occur. And the characters in the book includes ‘The Other’, which is described as “the part of each of our psyches that manifests itself as fear, regret, and other counterproductive emotional responses that prevents us from achieving our full potential as human beings.” What the hell is that supposed to mean anyway? Even the description of this “The Other” already struck me as complicated. This is definitely a book to be read when you actually have enough leisure time to be with yourself and maybe with a cup of coffee or two.

Well, but again, it might be me being terrified and freaked out by the description alone. Maybe I’m just freaking out too much. Maybe when I actually read the book, it’s not as complicated as I thought it was.

Has anyone read this book already? Would you guys care to share your thoughts and opinion about this book? No spoiler, though, please (although I wouldn’t mind a little teaser on the plot). I would really appreciate any thought or opinion you share. 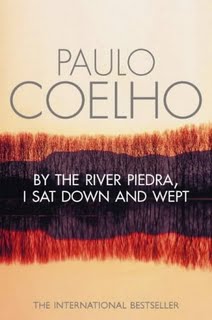 So I stumbled across this post and inspired to do the same thing. Questions are taken from the same blog (which was also taken from other site as you could read yourself), so the only different things here is only my answers. It’s indeed fun, and you could also try this out to kill some time ;) Reblog this!

via Writer Questions: Fill It Out!.