Watching Kecak dance was actually one of my priority in my to-do-list when I was visiting Denpasar last month for Nyepi. From one of my fellow blogger’s blog, he wrote that the best spot to watch this famous dance is in Uluwatu, near the temple, because they have one of the most beautiful view compared to other spot. There you could watch the sun set while at the same time enjoying the performance. I tried to watch it last year during an office outing, but unfortunately I was way too late by the time I got there, and I was very disappointed. So this time, I set my mind to not miss it the second time.

As usual, I’m gonna put a link that’ll direct you to a full explanation of the dance from Wikipedia, but in short, basically Kecak is a traditional Balinese dance that revolves around the Ramayana story. What’s really unique is that no musical instrument would accompany this dance. In exchange, a group of males would serve as an a cappella background chorus. The dance would start and end with them. But before they enter the stage, there would be a priest (or supposedly priest) sitting in the center of stage and pray. You can read the full story of Ramayana from the same Wikipedia link I provided you, but in general, the story would start from the time when Rahwana saw Sinta and plotted to take her from Rama’s side. So he first disguised himself as the golden deer, trying to lure Rama–which worked, because Sinta got bewitched by the magical creature and asked Rama to hunt it for her. As he left Sinta’s side, unknown to him, Rahwana then disguised himself a second time as a very old man, thirsty and weak. Sinta felt pity for him and offered him her help. Little she knew that the old man is not thirsty at all. So she felt captive into Rahwana’s hand. 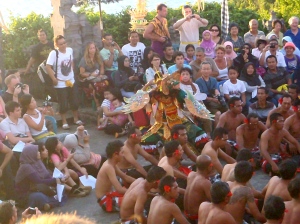 Now, just like a typical fairy tale, Sinta, as the helpless heroine waits patiently for help (or helps), as she persistently rejects Rahwana. Garuda Wisnu Kencana first come to aid. But Rahwana breaks one of its wings, and defeats it. So Rama send the powerful monkey Hanoman to free his beloved wife. He gives the monkey his ring as a proof that it is sent by Rama to help Sinta. So Hanoman meets Sinta and shows her the ring. Then, as Hanoman fights Rahwana and his minions, he is captured and tied to be burnt. But because of his great power, the fire does nothing to him. He showcases his might by breaking the tie and get rid of the fire, as well as defeating Rahwana. And basically that’s where the story ends in Kecak dance. There’s more to it, of course, but not in Kecak.

Of course, this is based on the performance I saw in Uluwatu. Garuda Wisnu Kecana (GWK) park also holds this awesome dance for a more affordable price, but of course, the view is not as beautiful, and from what I heard, the one in Uluwatu is currently the most popular. But honestly, I’m pretty curious. Perhaps the next time I visit Denpasar, I’ll watch the dance in GWK and judge for myself which one I like better.