Or maybe I was just exaggerating, since I don’t really know what the exact term would be for this dog’s teeth.

But before you read further, let me make this clear: I’m afraid of dogs.

Yes, yes, you might be confused, or you might not believe it at all, really, how could there be anyone on earth who hate dogs?

I like looking at dogs pictures, especially if they are cute, and I love some movies with dogs as the main character. I know how loyal they could be–or at least, I’ve read that somewhere–and how adorable they really are, but  their presence alone intimidates me.

Yes, I’m serious. As serious as a heart-attack.

I’m afraid of dogs, with their fangs, and their barks, and it really makes me insecure whenever they’re  running or jumping towards me. Hell, they following me around already makes me feel like running away as far as I could, but I never really do that. They say dogs can smell fear. And once, I’ve almost got bitten by my cousin’s dog, for she smelled my fear and anxiety whenever I’m around her.

In my country here, I’m not the only one who’s afraid of dogs, fyi. There are many here who are just like me.

I know, perhaps it still puzzles you.

One of my American friends once told me that it took her some time to get used to the idea that there are others, out there,  who really are afraid of dogs, since most people she knows never really had any problem with dogs. So the idea of this fear of dogs was like a brand new thing for her.

Not that I’m offended, really. But soon I learn that I ought to stress how the presence of dogs alone could really distress me, to anyone who own dogs.

The only time I’m not afraid of dogs are only when they sit in silence, and simply watch me walking pass them. As long as they don’t bark, and as long as they don’t follow me everywhere I go–including running and jumping towards me when I enter the house, I’m cool.

I’m getting quite used to my cousin’s dogs for some time now, for they only keep the nicest and tamest dogs inside the house, and soon they also got used to my presence in their house, so they never really bark when I came.

Like today, when I visit my aunt and uncle, I was actually terrified that they might have new dogs who are not  acquaintance with me yet, and that they might bark and run toward me. But instead, I found this little dog, simply looking at me while she sat near my aunt.

Since he didn’t bark, nor did he run toward me, I found myself completely… unalarmed with his presence. As a matter of fact, I noticed one unique thing about him as I observed his back: his teeth.

I don’t know what people called his teeth, for it’s unusual to see dogs with that kind of teeth. Abnormalities? Nonetheless, it’s really cute. And the way he was so calm and quiet while he was observing me, only makes him even more adorable than any dogs I’ve ever encountered. The name is Twinkle, by the way. 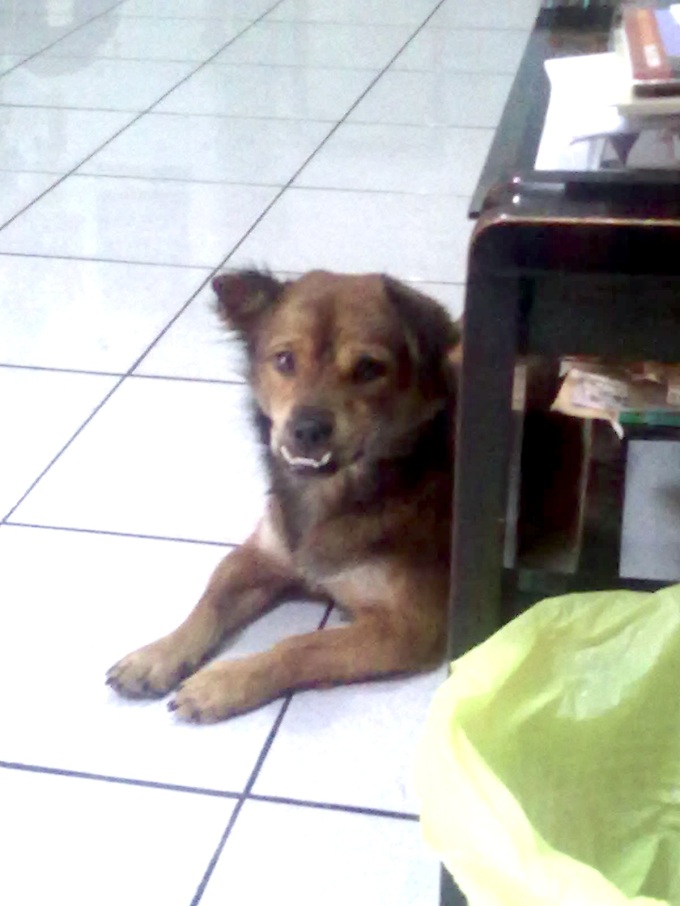 Oh, in case you haven’t noticed, I have the cutest teeth in the world.

And this is how my teeth looked like from the left side.

*edited August 30th, 2011. I wrote this post as “Ciki, A Dog With A Vampire Teeth” since my cousin tipped me by saying that the dog’s name is Ciki and that the dog is a she. Apparently, after he saw this post, he later texted me to correct the misinformation. Turns out the dog’s name is Twinkle (God knows why he’s named Twinkle) and that she is actually a he. Dear Twinkle, I’m so sorry for giving public a wrong information. I hope you wouldn’t mind being mistaken as a female-Ciki for several days!

2 thoughts on “Twinkle, not Ciki, A Dog With A Vampire Teeth”