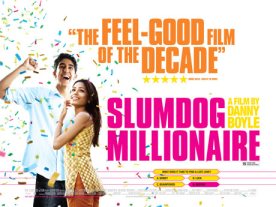 I just watched Slumdog Millionare last night, a movie about Jamal Malik (the ‘slumdog’), who appeared in a reality show Who Wants to be A Millionare (the Indian version) and succeeded to bring back 20 million rupees with him. However, his background as a street child created controversy, and therefore, before he answered his final answer for the last question, the police brought him and arrested him. He was accused of fraud. It was really horrible, I mean, he was being tortured, and they even electrified him, to made him admit the fraud he never done. He finally told the police a long story of his childhood, which later explained why he could answer all questions.

You could either find the reviews and the plot in the internet, or watched the movie yourself. I’m not gonna explain everything here.

Another reason why I then decided to watch this movie was because of Shahrukh Khan’s interview.

When My Name is Khan was just released, everybody around me seemed to talk about it, and hell yea, the movie’s worth-watching. And many people interviewed Shahrukh Khan due to this movie.

In the interview, people are comparing My Name is Khan and Slumdog Millionare. Perhaps because both are movies about Indian, with Indians in it as well.

Since I’ve watched both movies now, I gotta say, I do feel the differences. The funny thing is that, My Name is Khan is an Indian movie with American setting, but they use Hindi most of the time, which doesn’t really make sense to me when the interlocutor replied in English and seemed to understand Hindi too, while Slumdog Millionare use India as the whole setting of the movie, yet they used mostly English. They really should switch places, don’t they?

Another thing that differentiate those two movies is, I think, Slumdog Millionare ‘lost’ its India sense.

In most Indian movies that I’ve watched (Kabhi Kushie Kabhie Gham, Dil Hai Tumhaara, 3 Idiots, Kal Ho Naa Ho, and some other that I can’t remember), the plot and nuance tend to be exaggerated at some points.

In Kabhi Kushie Kabhie Gham, all the casts seem to cry easily that I think I could just slap them and and they would cry again and again. I know, mostly they cry whenever they remember about their family (it IS, a story about family), but it’s not just that. There’s one occasion, when Shahrukh Khan (I forgot his name in the movie) and his family visit their son’s school for I-dunno-what-occasion, out of a sudden, his son along with the other children (who are all British), united as a choir, sang the Indian anthem, Jana Gana Mana, in a British school, along with British children! Seriously, it doesn’t seem to make sense to me.

Then in Dil Hai Tumhaara, well the plot is just so Indian, so considering that fact, I don’t really think there’s a problem with the plot. The dances are superb, haha, but yea, it’s a complicated love story which is just too… unreal and weird. Ironically, we could find similar plots (heaps of it)–even the worse versions, in Indonesian sitcom or what we called as ‘sinetron.’

I kinda forgot Kal Ho Naa Ho, cause I watched it long time ago, but I remember one scene when the lead actress (Pretty Zinta) said, “Because of him, I start to smile again.” Then the movie showed heaps pics of Pretty Zinta smiling. Suddenly I rewind the movie, and watched it from the very beginning again, and felt so weird right away, because even before she met the guy, she’s been smiling many many times. Wow, it doesn’t make sense at all.

In My Name is Khan (this is even weirder), most of the time the main characters (the Indians) are using Hindi as their conversational language, and surprisingly, they use it to everybody. One exception that I remember: when Khan got arrested by the security officers in the airport. But most of the time they use Hindi, to everybody, including the Americans. Well, there’s a possibility that those Americans understand Hindi, but they all replied in English, and then they got replied by the Indians in Hindi, and they replied in English again.

Those code-switching is indeed, possible in the reality, but they don’t happen again and again and again, I guess. It sometimes happen to me too, when I speak in English, then my friend replies in Indonesian (and sometimes my friend happens to be ‘bule’, which makes me think that we should actually switch places), and then I said something in English again, yet my friend still replied in Indonesian. Finally I switched to Indonesian.

But in the movie, it’s just so weird, why don’t they use English instead? That would perfectly make sense! They live in the US!

Then in 3 Idiots (this is a GOOD movie!), yea, they still have the exaggerating part, like, the dances and the singing, but that’s just Indian movies. That’s the culture, so it doesn’t feel really weird.

Now, those list above, are the things that Slumdog Millionare is lacking. They don’t do the dance during the movie (the dance is only available at the end of the movie, which make me realize now that Jai Ho is the movie’s soundtrack), and they don’t have the exaggerating parts. The story might be something that could only happen in books or movies, but the acting, the setting and the plot, are all perfectly make sense. Terrific.

But again, those are just my opinions, based on my perspective.

P.S. I gotta add one thing, India is full of good actors and actresses!

7 thoughts on “Indian Movies: What Makes It Indian?”